As you may know I am currently working on RHQ-Metrics, a time series database with some charting extensions that will be embeddable into Angular apps.

One of the goals of the project is also to make the database also available for other consumers that may have other input sources deployed as well as their own graphing.

Over the weekend I looked a bit at Grafana which looks quite nice, so I started to combine RHQ-metrics with Grafana.

I did not (immediately) find a description of the data format between Grafana and Graphite, but saw that InfluxDB is supported, so I fired up WireShark and was able to write an endpoint for RHQ-Metrics that supports listing of metrics and retrieving of data. 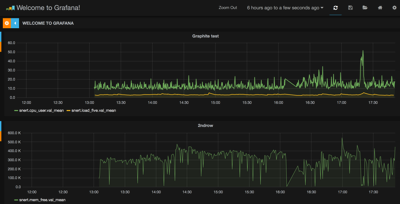 Grafana Dashboard with some Metrics 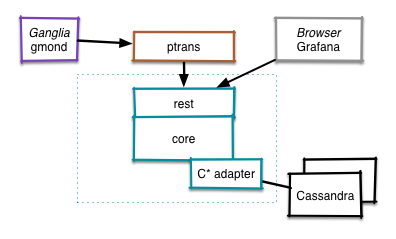 A Ganglia gmond emits data over IP multicast, which is received with the protocol translator client, ptrans. This translates the data into requests that are pushed into the RHQ-metrics system (shown as the dotted box) and there stored in the Cassandra backend.

Grafana then talks to the RHQ-Metrics server and fetches the data to be displayed.
For this to work, I had to comment out the graphiteUrl in conf.js and use the influx backend like this:

As you can see, the URL points to the RHQ-Metrics server.

The code for the new handler is still "very rough" and thus not yet in the normal source repository. To use it, you can clone my version of the RHQ-Metrics repository and then run start.sh in the root directory to get the RHQ-Metrics server (with the built-in memory backend) running.

I have now added code (still in my repository) to support some of the aggregating functions of Influx like min, max, mean, count and sum. The following shows a chart that uses those functions: