As already indicated, Matze Wessendorf and I sat together at Red Hat Summit and have created an alert sender plugin for RHQ that uses the unified push server from Aerogear to send alerts as push notifications to administrator phones.

For this to work you not only need to install the alert-sender plugin on RHQ side, but also have an appropriate application installed on your handset.

After you have installed the plugin in RHQ you need to go to Administration->Server Plugins and select the Alert:UPS entry. In the configuration settings you need to provide the host name where the push server lives, the secret to talk to it and also the id of your deployed handset app:

After this is done, you can select this alert sender when you set up new notifications as with other senders: 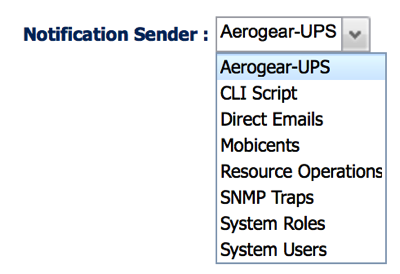 Right now this does not have any alert-specific settings, but I guess that in the future one could perhaps set the alert sound here for iOS devices or similar.

And after all this is done, the app is deployed and your handset is on, you could receive a push message just like this:

Screenshot of our first alert sent

If you want to have a look at the sender plugin, you can go to the RHQ repository on GitHub.

I was very fortunate to be able to attend this years Red Hat Summit in San Francisco. 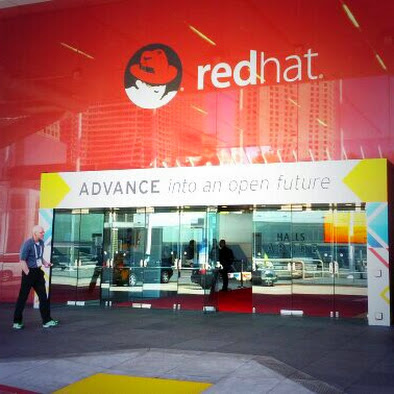 Right before Summit, the accompanying DevNation conference already started on Sunday with some pretty interesting talks - among others about Fabric8 and Hawt.io.

As both Summit and DevNation happened at Moscone center, it was pretty easy to mix and match sessions. Dev Nation also featured a "hack area": some tables that had huge power strips in the middle to easily connect laptop and smartphone chargers. And usually the table were not as empty as on the next image: 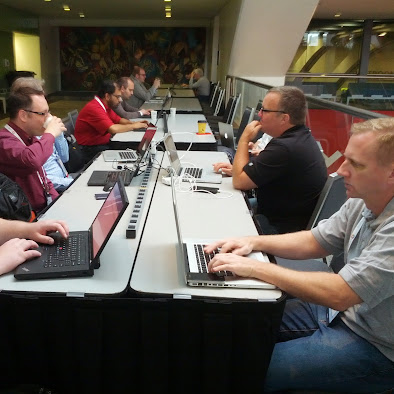 I also met at one of those tables with Matze Wessendorf from the Aerogears team and we developed together an Alert Sender plugin for RHQ, that uses the Unified Push Sender to directly bring alerts from RHQ to the lock screen of the admins phones. The plugin only exists in private git at the moment. We need to do some polishing and remove some passwords before pushing to rhq git.

Summit presentation
Thomas Segismont and I did a presentation "What is new with JBoss ON" and we also had a BOF session later on.
The presentation ran well with around 60 attendees. Most of the audience already knew JBoss ON.
Of those around 2/3 are running 3.1, a few 3.2 and one person was even on 3.0 (unfortunately I was not able to find him later to find out why)

The slides of the presentation are already available online; unfortunately they do not cover the two live demos from Thomas, showing how to add a new Storage Node and how to make use of the new bundle permissions that were introduced in JBoss ON 3.2 (and also RHQ). 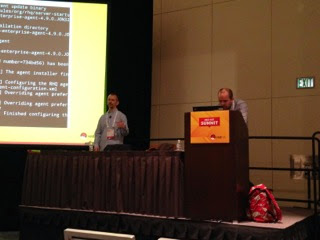 Thomas at work and me doing a bit of talking.

The BOF/Meet and Greet session later was also quite well attended.
People had good questions and ideas and we were talking a bit about roadmap and also about some vision wrt. JBoss ON 4. Unfortunately we got kicked out the room much too early.

OCSystems
Thomas and I also had the luck to be invited by OCSystems, the makers of RTI that also runs on top of JBoss ON for a dinner at the Waterfront restaurant, from where we had an excellent view on to the bay bridge: 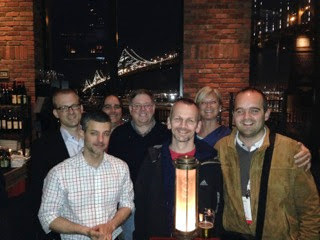 And last but not least at the Dev Nation Hackathon, Team "RHQ" won the 2nd prize with some "home automation":
a RaspberryPI running the agent had an LED blinking and we had also one of the MBed boards (Those are developer boards a little like Arduino but with an ARM cpu and sensors + an LCD on board)
connected to read in sensor data; unfortunately I lost some time at the start of the hackathon,
so we could not really use that info in the plugin; 1/2h more time and ... :-)
For the 2nd half of this, Thomas has built a Cordova application for his Android phone and showed how to receive push messages that were sent when alerts are fired with the brand new aerogear-ups alert sender plugin mentioned above.

I should have taken a photo of all the wiring we had set up, but totally forgot
about it.

I will re-create / finish this demo and blog about it