So, I have been at Jazoon for the last few days. I arrived on tuesday at noon - just missing the keynote by James Gosling - I have heard that it was not that good from the content, but I would have liked to see it nevertheless. Then I attended some sessions and had lunch (a "Bratwurst" - sausage, every attendee only one piece). There was a talk about "IPhone hacking for java programmers" - I was expecting to hear about e.g this x-compile effort, but the session really just presented the Apple tools and Objective C. Not that I did not find this interesting and the talk was also well presented, but it just was not what I was expecting.

In the afternoon I went with Bela for a run and then basically went with the other JBoss guys for dinner.

On Wednesday I had my own presentation, which did not that well as I wished - the 50 mins time constraint irritated me totally resulting in me being done too early. But at least I created enough interest to have people come to me later and asking about how to write plugins :)

Rickard Öberg was supposed to give a talk, but did not show up. Everyone said that he was perhaps captured by the CIA :-)

The last session of the day was the final of the "rookies competition" - rookies were asked to submit a talk and the program committee selected three talks that got presented and jury selected the final winner. The talks were of mixed quality and I had the feeling that the 3rd guy was pushed by Sun to the last 3. Luckily at least Bela Ban gave the guys an honest feedback - otherwise the jury process would just have been a big joke.
On wednesday evening was the party with burgers for dinner (lunch was pizza). I had some nice talks with some nice guys.

Thursday was the last day for me. Again some sessions, then lunch (sausage again), more sessions and then some talking with Alexander Neumann from iX magazine. Ed Burns was giving a talk (as a backup for a cancelled one) about his new book (I later got a copy of it that he signed) - for me one of the better sessions in the conference.

On all of the three days, the conference network had issues - either it was impossible to get an IP address or some other issue occurred.

So Jazoon leaves a very mixed feeling for me - on one side I had very good face to face talks and fun with people I met and on the other hand I was not happy with many of the talks I attended, the food and the network.

For food and network I could imagine that just raising the conference price slightly and then getting better food for that would work (and buy some more (private) IP addresses too. But for the sessions it is very subjective, so that someone else who was in the exact same sessions than I was, may have found it super.
2 comments: Links zu diesem Post

Today, while being at Jazoon in Zürich, I took a run together with Bela from the Saalsporthalle (close to the conference venue) to the top of the Üetliberg.

Things went a bit strange, as at some point we switched on the most direct track to the hilltop. So in summary we did more than 400m of altitude. This included 'crawling' over tree roots on a very wet soil.

You can have a look at the track at GPSies.com.

Here is a snapshot from Trailrunner about my performance (grey shows the heigth):

In both cases start height and end height do not match, as my Forerunner took a long time to discover the satellites and only did so while we were already running. This also means the distance has probably slightly longer.

A very nice thing is that at the Saalsporthalle, it is possible to just go into a public cloak room with showers, to change to sporting clothes and to shower later. Outside is even a possibility to clean the running shoes.

A nice fellow at the top of the Üetliberg took photos of Bela and me and sent them via email to me: 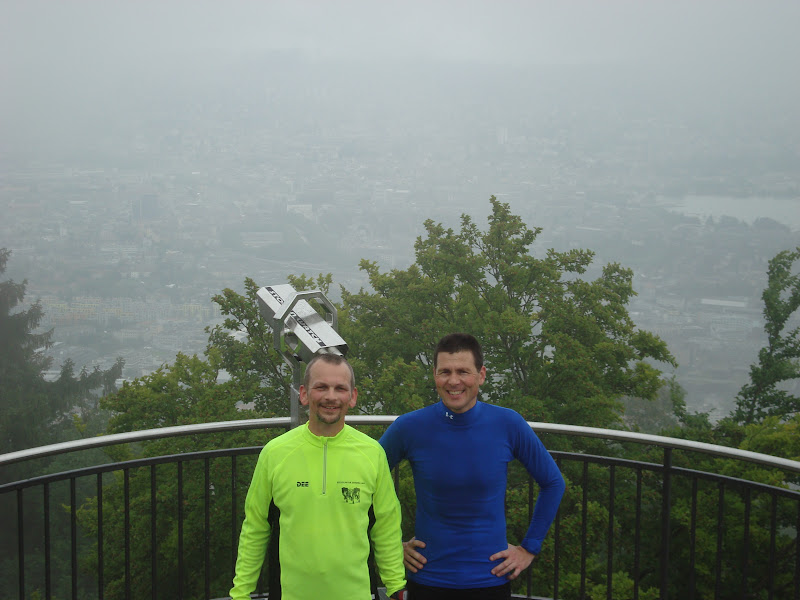 At the right you can see a bit of the Zürichsee. 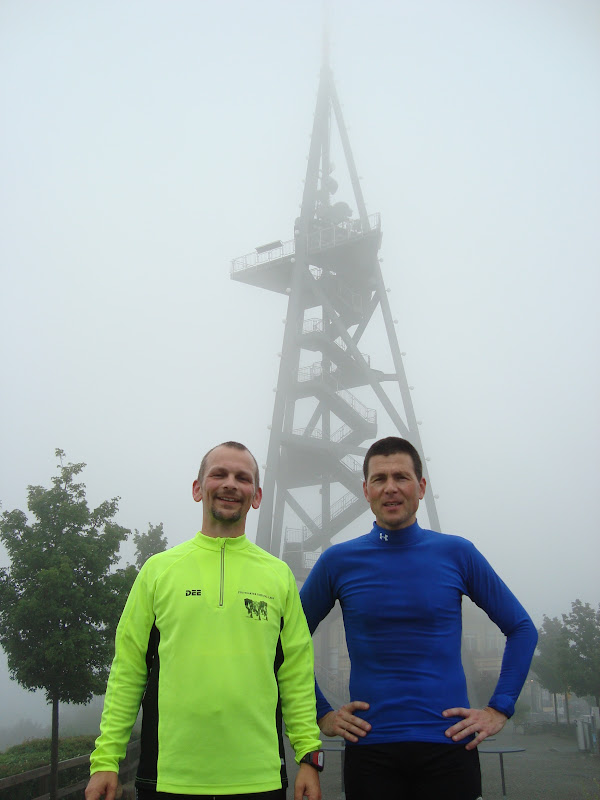 Email ThisBlogThis!Share to TwitterShare to FacebookShare to Pinterest
Labels: running

Yesterday was Stuttgart-Lauf again. Unlike the other years (see here for last year) I did participate in the Half-marathon (21 km).

When practicing, I was able to run the distance in 2:08h, but on a very flat course, so I was thinking that 2:15h would be realistic for this more demanding course.

But then at km 17 it looked like I would be able to run the track within 2h, so I tried to and here is the result: 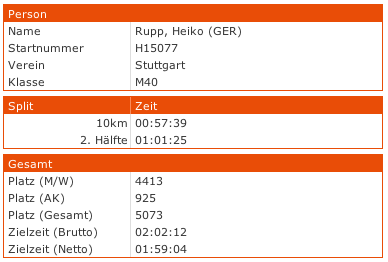