Little extension board for the PI

Long time ago I've started creating a small extension board for the RaspberryPI to get some physical world into hacking. 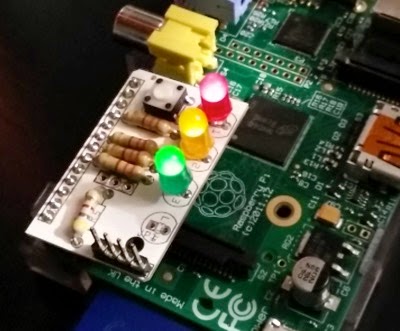 Board installed and running on the PI.

The first iteration was on a bread board with some wiring, then for the next iteration I took a stripe PCB and wired it there. Worked but was not pretty: 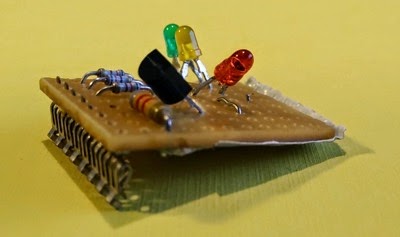 Anyway, as the concept worked out, I decided I need some printed circuits. I played around with some options, but nothing was really cool for hobbyists (and I did not want to manufacture them my self with all the chemicals needed). And then I found Fritzing, which was exactly right.

Not only does Fritzing produce boards, but it also a nice graphical editor application that can be used to create a schematic, assign parts from a large part library, (auto) route the schematic and send the result to production 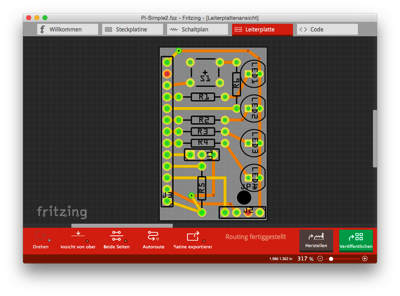 Fritzing editor with routed PCB in both side view

After I created the layout etc. I sent the design to the Fritzing fab and got by PCBs back after around a week of round trip time.

Yesterday I now sat down with the PCB, some needed parts and my soldering iron and assembled the parts 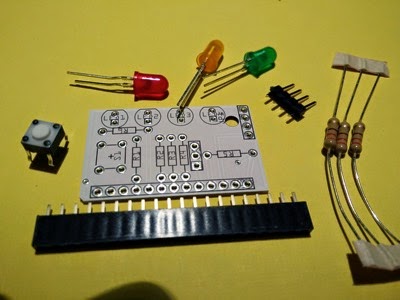 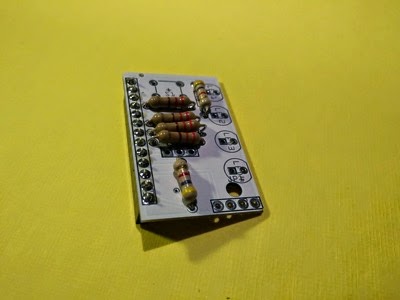 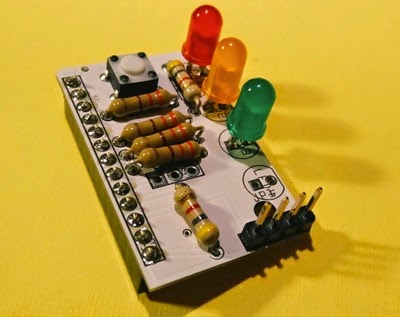 In the last image there was still the thermo sensor missing, as well as the 4th LED.

Now when that board is put on to the extension header of the PI (inner row, that is closer to the CPU, the following little shell script will light all LEDs and then display the current temperature every second

One thing where I am not yet sure is if the DS1820 actually needs the phantom power. In an older experiment with the chip, I did not connect pin 3 at all. I think this additional power may even heat the thermometer chip, as the values that I currently get a are some 5-6 degrees too high.

If you are interested about more details of the board, you can look at this Fritzing page, where I've uploaded the .fzz file.

And if you are using RHQ, you can look at this agent plugin to use the LEDs and the thermometer chip from within RHQ.

Well, actually that is not Hawk, but HAWKULAR 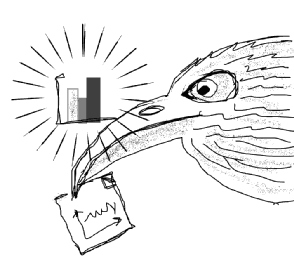 Hawkular is the next generation monitoring (and management) project from JBoss incorporating the best features and knowledge from RHQ while at the same time improving on the less strong parts.

Hawkular is composed of a number of individual sub-projects that work together and deliver individual services. The design of those services is in a way that they could also be used standalone in other projects.

The currently most prominent sub-project is Hawkular Metrics, which you probably recall as "RHQ Metrics" and which just has released its version 0.2.7 under the old name. There is also an OpenShift cartridge available for it.

have also been moved over to the Hawkular organization on GitHub

All the pieces are / will be assembled in the Hawkular project

All projects and sub-projects live in GitHub under the Hawkular organization. Right now we have set up the basic projects and other infrastructure. The overall issue tracker is setup at Jboss.org with individual trackers for the sub-projects (you can use the overall tracker and we dispatch).

Right now we are working on getting an end-to-end workflow and integration done for Hawkular.

Development discussions around Hawkular happen on the Hawkular-dev mailing list and you can find the developers hanging around on IRC at irc://irc.freenode.net/#hawkular.