Support for paging in the RHQ REST-api (updated)

I have just pushed some changes to RHQ master that implement paging for (most) of the REST-endpoints that return collections of data.

If you remember, I was asking the other day if there is a "standard" way to do this. Basically there are two
"big options":


While I think paging information are meta data that should not "pollute" the body, I understand the arguments from the JavaScript side that says that they don't easily have access to the http headers
within AJAX requests. So what I have now done is to implement both:

Please try this if you can. We want to get that into a "finished" state (as for the whole REST-Api) for RHQ 4.8
2 comments: Links zu diesem Post

[ If you only want to see code, just scroll down ]

In RHQ we had a need for a security domain that can be used to secure the REST-api and its web-app via container managed security. In the past I had just used the classical DatabaseServerLoginModule to authenticate against the database.

Now does RHQ also allow to have users in LDAP directories, which were not covered by above module. I had two options to start with:


The latter option was of course favorable to prevent code duplication, so I went that route. And failed.

So next try: don't re-create the domain on startup and only add/remove the ldap-login modules (I am talking about modules, because we actually have two that we need).

This also did not work as expected:


So what I did now is to implement a login module for the rest-security-domain that just delegates to another one for authentication and then adds roles on success.

This way the rhq-rest.war has a fixed reference to that rest-security-domain and the other security domain could just be handled as before.

Let's start with the snippet from the standalone.xml file describing the security domain and parametrizing the module

So this definition sets up a security domain RHQRESTSecurityDomain which uses the DelegatingLoginModule that I will describe in a moment. There are two parameters passed:


For the code I don't show the full listing; you can find it in git.

To make our lives easier we don't implement all functionality on our own, but extend
the already existing UsernamePasswordLoginModule and only override
certain methods.

First we initialize the module with the passed options and create a new LoginContext with
the domain we delegate to:


The interesting part is the login() method where we get the username / password and store it for later, then we try to log into the delegate domain and if that succeeded we tell super that we had success, so that it can do its magic.


the loginOk flag is needed here so that the superclass will call LoginModule.commit() and pick up the principal along with the roles.
Not setting this to true will result in a successful login() but no principal
is attached.


After success, super will call into the next two methods to obtain the principal and its roles:


And now the last part is the Callback handler that the other domain that we delegate to will use to obtain the credentials from us. It is the classical JAAS login callback handler. One thing that first totally confused me was that this handler was called several times during login and I thought it is buggy. But in fact the number of times it is called corresponds to the number of login modules configured in the RHQUserSecurityDomain.

Again, the full code is available in the RHQ git repository.

If you write such a login module and it does not work, you want to debug it. Started with the usual means to find out that my login() method was working as expected, but login just failed. I added print statements etc to find out that the getRoleSets() method was never called. But still everything looked ok. I did some googling and found this good wiki page. It is possible to tell a web app to do audit logging

This flag alone is not enough, as you also need an appropriate logger set up, which is explained on
the wiki page. After enabling this, I saw entries like


So it became obvious that the login module did not set the principal. Looking at the code in the superclasses then led me to the loginOk flag mentioned above.


So here you see that the principal rhqadmin has logged in and got the role rest-user assigned, which is the one matching in the security-constraint element in web.xml.

I've presented the above as a Hangout on Air. Unfortunately G+ muted me from time to time when I was typing while explaining :-(

After the video was done I got a few more questions that at the end made me rethink the startup phase for the case that the user has a previous version of RHQ installed with LDAP enabled. In this case, the installer will still install the initial DB-only RHQUserSecurityDomain and then in the startup bean
we check if a) LDAP is enabled in system settings and b) if the login-modules are actually present.
If a) matches and they are not present we install them.

RHQ 4.7 has been released and one of the two major features in this release are
the new charts that finally have replaced the year old charts that we had since the
start of RHQ project: 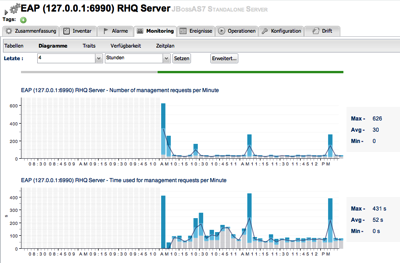 The new charts are implemented on with the awesome D3.js toolkit as I've written before.

The other big change is an upgrade of the underlying app server to JBoss EAP 6.1 alpha 1.

As always there have been many more smaller improvements and bug fixes.

Please check the full release notes for details. They also contain a list of commits.

RHQ is an extensible tool to monitory your infrastructure of machines and applications, alert operators on user defined conditions, configure resources and run operations on them from a central web-based UI. Other ways of communicating with RHQ include a command line interface and a REST-api.

You can download the release from source forge.
As mentioned above, the old installer is gone, so make sure to read
the wiki document describing how to use the new installer.

Please give us feedback, be it in Bugzilla, Mailing lists or the forum. Or just join us on IRC at irc.freenode.net/#rhq.