Adafruit delivers the Huzzah ESP with NodeMCU 0.9.5, which is pretty old.

So I was thinking of a newer version. The process is pretty well described on nodemcu.readthedocs.org. Unfortunately it also says

After digging through Adafruit docs (they do not explicitly mention the type of ESP) and also looking at the output of node.info() I figured out that the Huzzah ESP has an ESP12 with 4MB

I got my self a new image from the awesome on demand build service and then flashed it like this:

Future updates of the firmware to newer versions no longer need to flash the esp_init_data_default.bin file.

The other day I was writing about 'RHQ-Metrics and Grafana' and was describing how you can incorporate data from other system management agents.

Fast forward a bit and Raider is now called Twix and RHQ-Metrics has morphed to Hawkular-Metrics under the Hawkular.org umbrella.

Recently I have also been playing with Arduino and Co. and got myself also an Adafruit Huzzah ESP8266 board. This is a breakout board with the ESP8266 microprocessor on, that has a bunch of IO pins and built-in WiFi. With the default firmware it is programmed in Lua. 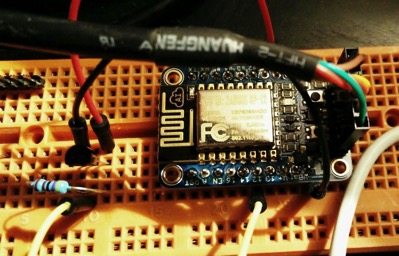 Huzzah on breakout board

While one can program the ESP from the Arduino IDE, I thought to give Lua a try (also to get a feel for the difference to the WiPy, that also comes with Python as a high level language). What is nice with the ESP and the NodeMCU firmware is that it already comes with support for networking, 1-wire, MQTT and more out of the box.

To get started I took the hello-world of IoT-sensors and hooked up a DS18B20 OneWire thermo sensor (for those old enough, I did that in the past with RHQ) up to the ESP and then have this communicate to a MQTT Broker (mosquitto). 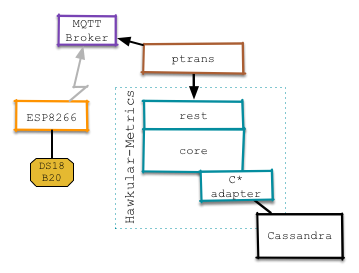 As said before we have with Ptrans a universal protocol translator that can be used to feed data from collected, ganglia and others into Hawkular-Metrics. I've taken that and added support for MQTT (in my personal repo for now). Ptrans will now connect to a broker and listen on the '/hawkular/metrics' topic for data that needs to be in graphite format like

The timestamp is optional, as in my case I was not able to get any real time clock data from the micro controller (there seem to be variants that have a clock on board).

I will post more on the topic in a laster posting.