GSoC students where are you? Jopr wants you!

JBoss and Fedora are this year again participating in Google Summer of Code as mentoring organization.

We have set up a list of ideas at the JBoss Wiki.

For Jopr some ideas are:

Of course contributions are not limited to these ideas.

If you want to participate, be quick as deadline for submissions is on April 4th !

For more information have a look at the GSoC FAQ.

Working on a standalone PluginContainer wrapper

I have been working on a standalone plugin container wrapper for RHQ and Jopr which allows to call plugin functionality without the need for a fully running agent and server. Of course this only makes sense while developing a plugin.

This video shows how this may look like (swf format).

This stuff is not yet committed to subversion, but I guess I will do that in the next few days.

Review of my talk @RheinJug with pictures

Yesterday I was talking at Rheinjug in Düsseldorf about RHQ, Jopr and JBoss ON.

To get to Düsseldorf, I took the ICE fast train which took 2:41h for 410km distance, which is the fastest way to travel between those cities. On this course, Deutsche Bahn is offering WiFi on board (unfortunately not for free), so you basically have Internet at 300km/h - nice. While being on the train I also started about implementing a Standalone PluginContainer wrapper that can be used when implementing a new plugin to test it; I will post about this separately.

After I arrived in Düsseldorf I first went to my Hotel, which is nicely located in the old town - only 5 mins by subway from the main station. after check in I walked around a little bit in the old town and went to the Rhein river. On the next picture you can see locals with one of their favorite occupations: 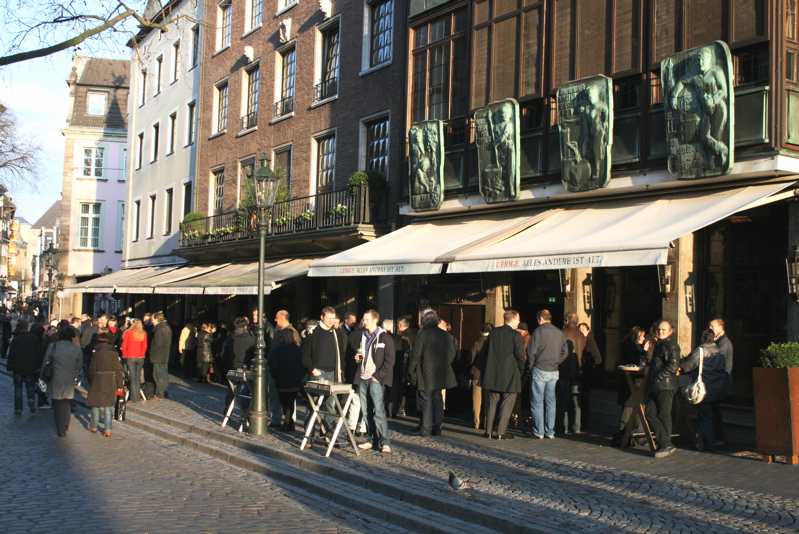 People were just standing outside a brewery and drinking Altbier. In summer that place is crowded.

Düsseldorf is supposed to have "die längste Theke der Welt" ( 'the longest bar counter of the world', which is not to be taken literally ) see also:


There are lots of other restaurants and bars in that area too, as you can see from this picture: 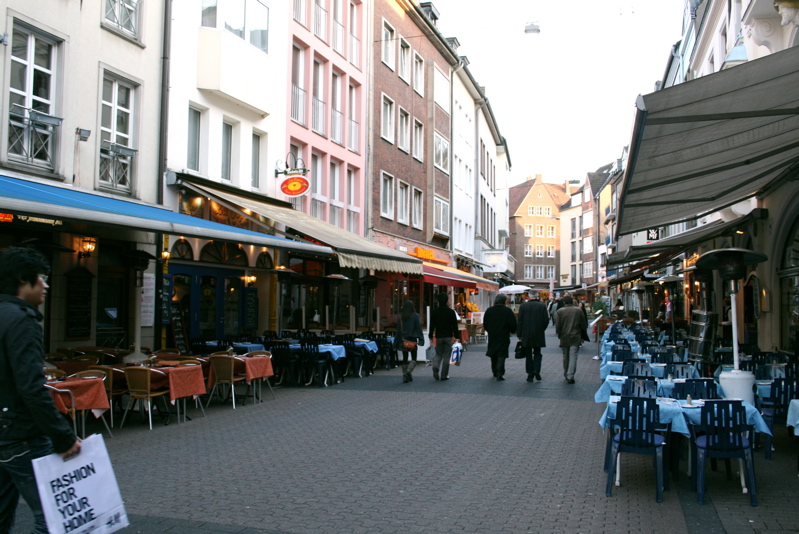 I took the tram to the Heinrich-Heine-University where the talk was taking place in an auditorium. The first people were already there and enjoying food and drinks sponsored by Red Hat Germany. 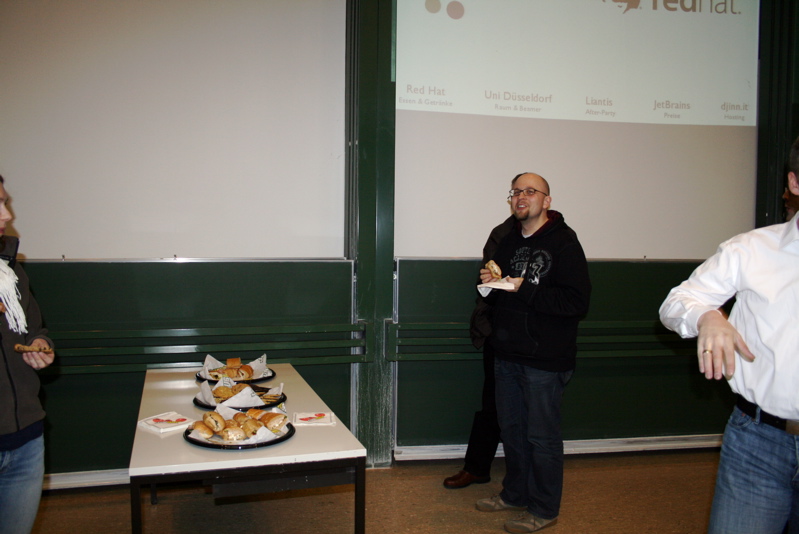 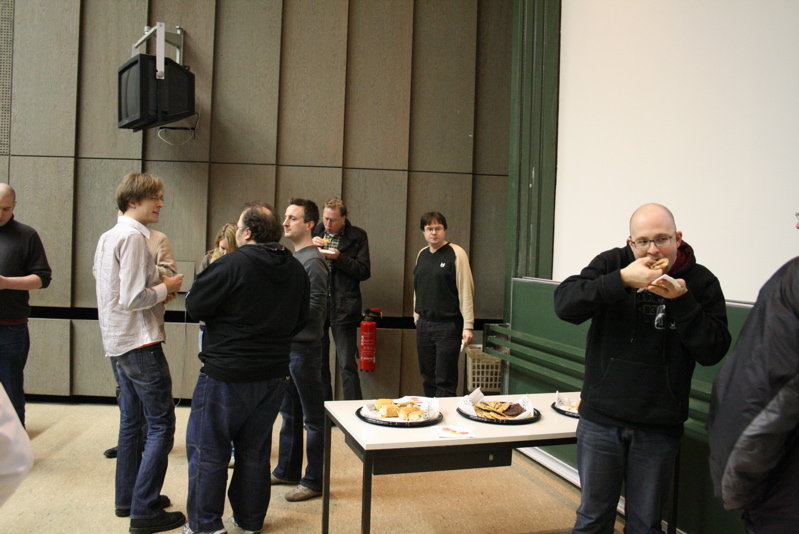 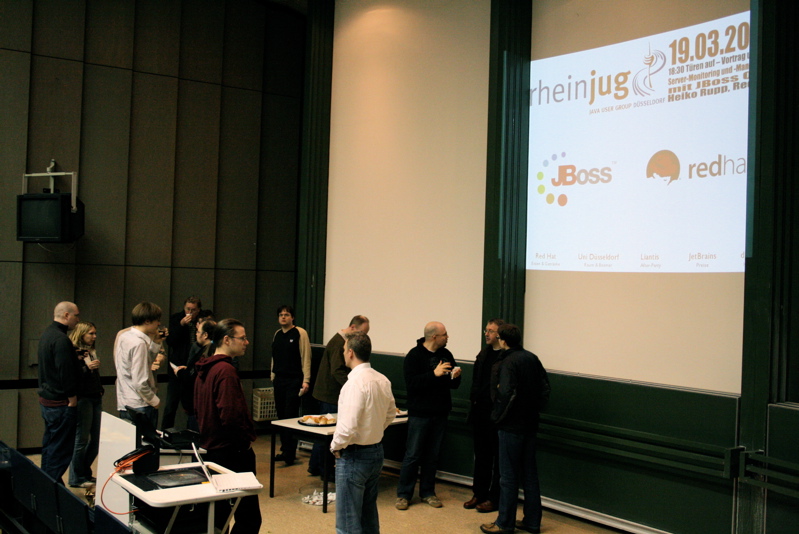 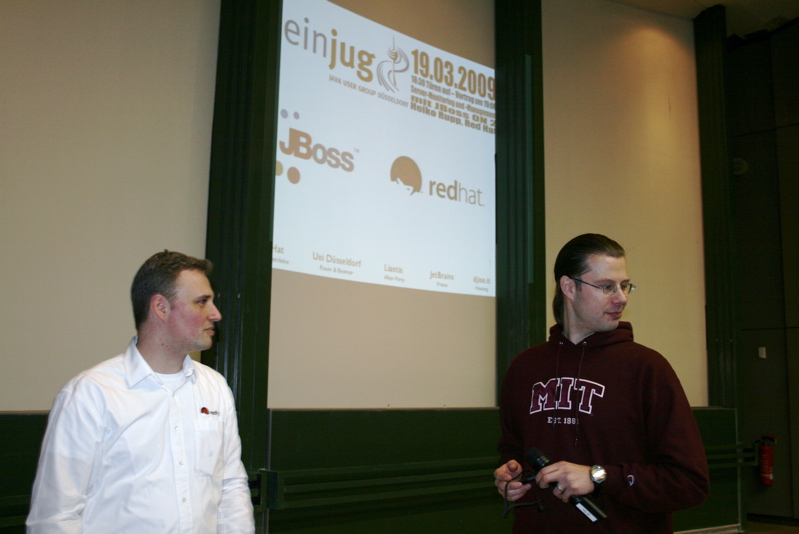 Michael Jastram from the JUG opening the evening by welcoming all of us and doing a little lottery - prizes were a Jetbrains license, a backpack and a copy of my EJB-3 book.

After this my colleague Joachim Schröder who is living close to Düsseldorf briefly introduced Red Hat before my talk started: 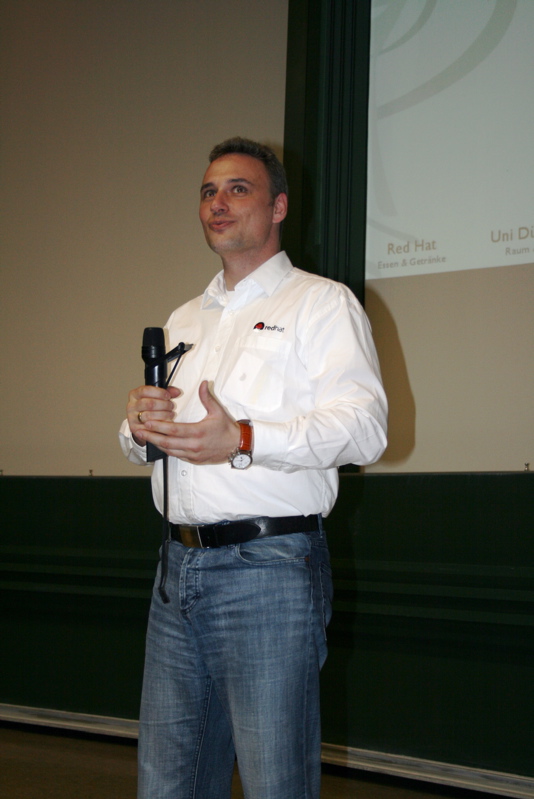 My talk was taped by the user group and should soon be available on the Rheinjug.tv web page 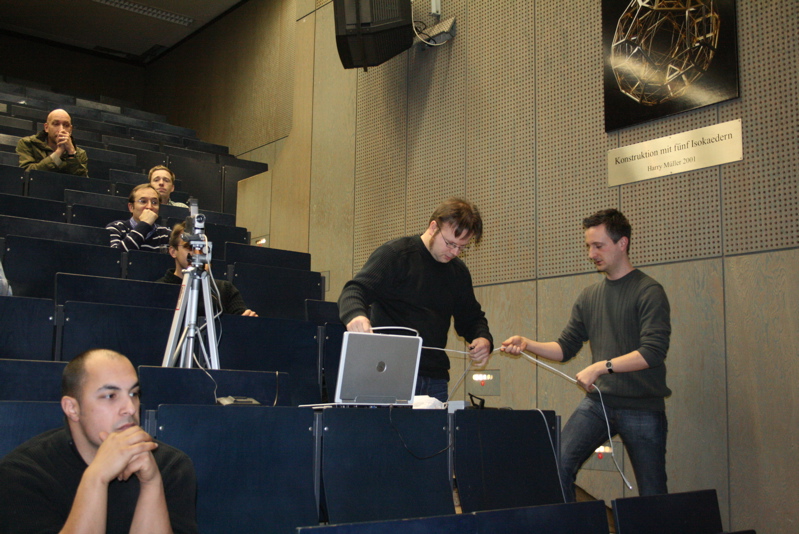 (Installation of the camera)

Around 40 people had found their way to the presentation at that time. The talk itself went well. As usual I was also talking about the thermometer chip monitoring that I implemented a while ago. And of course I did a live demo of the system which was well received. In the Q&A session we had some good questions from people who obviously have an administration background. 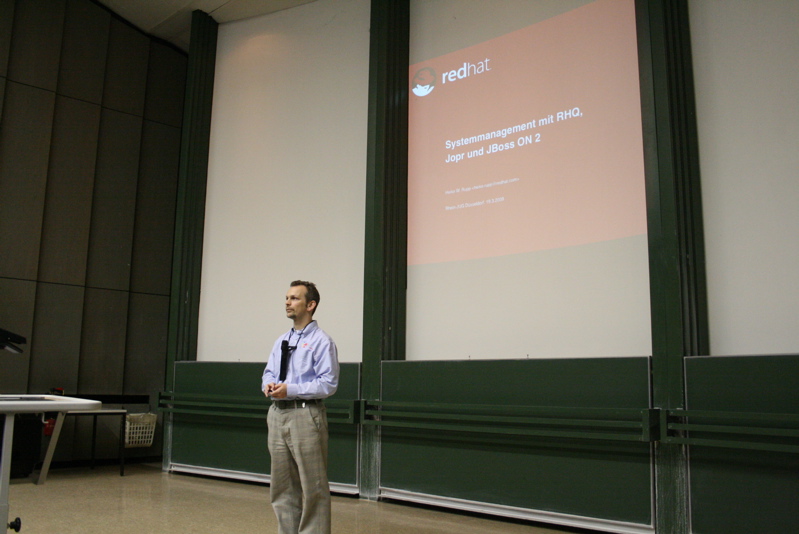 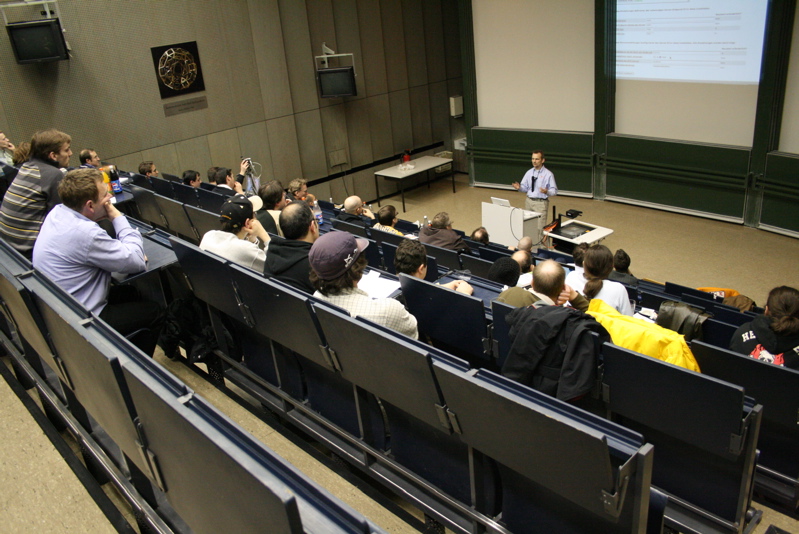 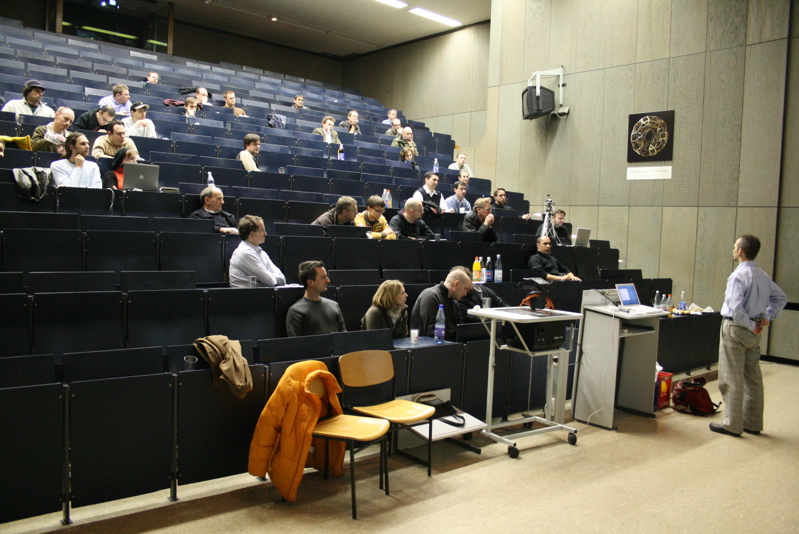 When this "official" part was over we relocated to a different part of the building and did some more socializing. 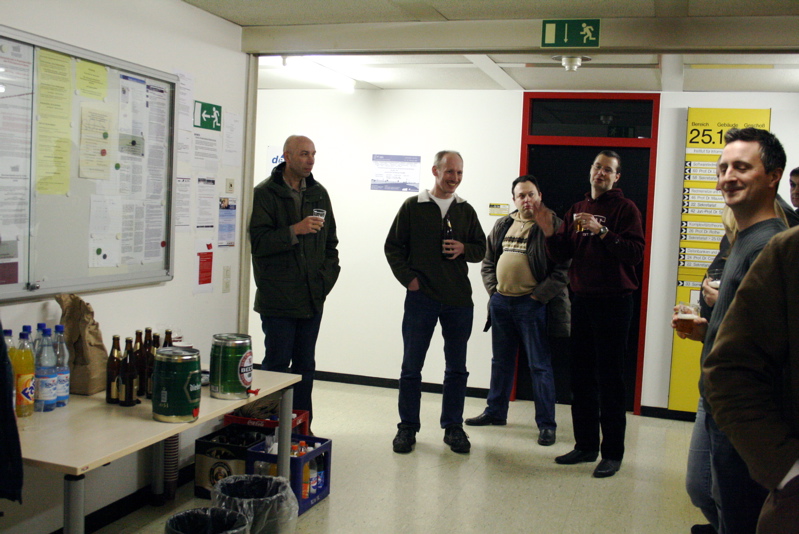 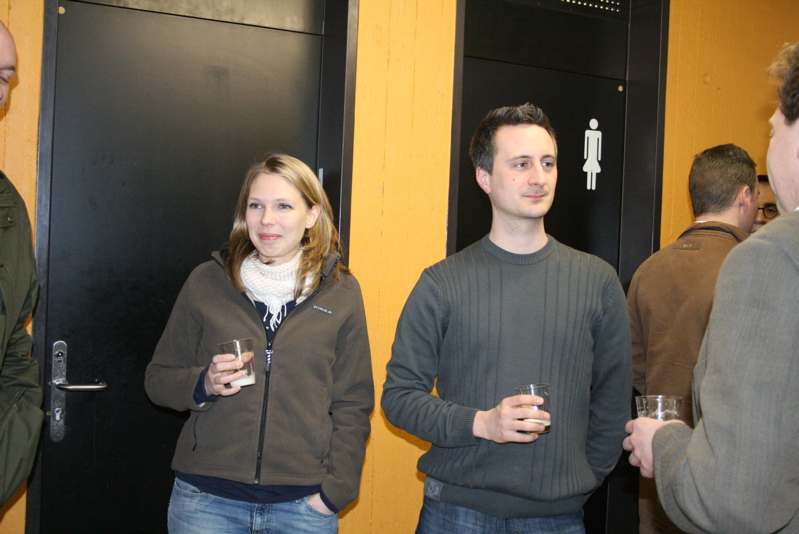 Joachim drove me to my hotel, where I arrived around midnight. While this he told me that he especially found the thermometer chip part very interesting, as he recently implemented some monitoring of his heating system with this exact chip and with some proprietary code. So he is now interested in replacing this with a Jopr based solution :)

This morning when I went back to the main station, I met Mete again, who was in the talk yesterday. He invited me for a coffee (thanks again) while I was waiting for my train and we had another good conversation.

( As you can see from the comments, Mazz has renamed the Interface class, so I updated this article. )

To use the api, you need to do two things:

With the following entry in the plugin descriptor, rhq-plugin.xml


There are some real examples of the usage of this API, like e.g. in the Postgres-plugin.

As this API is added to RHQ, it applies to Jopr (trunk) and the upcoming release of JBoss ON as well.

I have also updated the plugin generator to support this new API - its version is now 1.2.1.

RHQ Tip of the day: XA issues with oracle ?

Are you running Jopr, RHQ or JBoss ON 2 with Oracle and see the following warnings in the servers logfiles:

Then you need to set up your Oracle user for XA mode:

This is also described in the Jopr installation page on the JBoss.org Wiki (and of course in the JBoss ON manual)
No comments: Links zu diesem Post

I did just run the Peacekeeper benchmark on my 2.5 years old MacBook (2GHz Core Duo CPU). And here are the results: 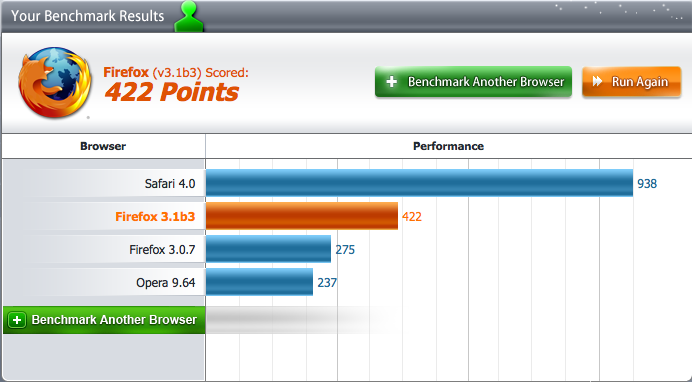 So Safari 4 beta is nearly 3.5 times faster than Safari 3.0 and more than 2 two times as fast as the third beta of upcoming Firefox 3.1.

The Devoxx team has made the slides of most university and tools in action talks available.

The ones for my talks are:

Talking at RheinJUG next week

I'll be talking at RheinJUG, Düsseldorf next Thursday, March 19th about Jopr, JBoss ON and RHQ.
Subject of the talk is:

RheinJUG created a cool announcement poster (original is on their web site, this is a scaled down png version of the original PDF): 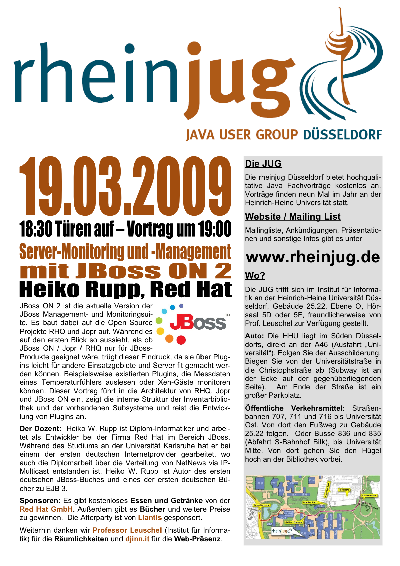 You can find more details at the web site of RheinJUG.

I am pleased that Red Hat is providing free food and drinks for this event - many thanks for that.
No comments: Links zu diesem Post

Going to Karlsruhe to talk to the local Java User Group was a little bit like going back in history - I used to live for over 10 years in Karlsruhe and did study computer sciences at the University. So I was giving the talk in an auditorium where I used to sit my self on the benches years ago.

I went to Karlsruhe by train, took the tram to the city center and then walked to the University and the CS building. When I arrived the first two members of the audience have been there. David who used to organize the event unfortunately got ill and was not able to attend.
After some waiting, the audience grew to more than 20 people.

Before I started my talk, there was a presentation about Jazoon by Christian Frey. Christian explained why it is worthwhile to attend Jazoon and left some vouchers for user group members. 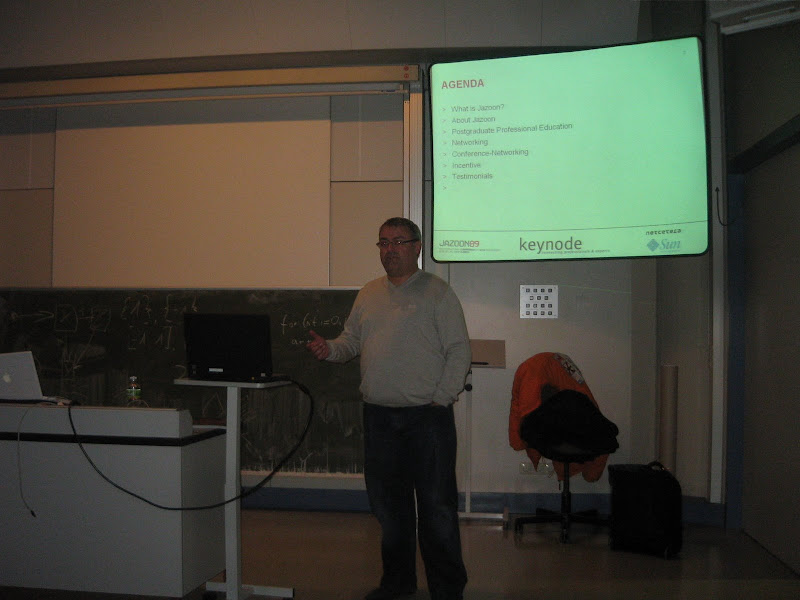 Next was my talk, which went well. The audience was interested and from the questions, it was obvious that at least some of the members have management and monitoring experience. This also resulted in some good new ideas.

Of course I did a live demo of the latest Jopr 2.2 beta 1 release.

After the talk there was some Q&A and then (nearly) everyone went home quickly as it was already past 9pm. 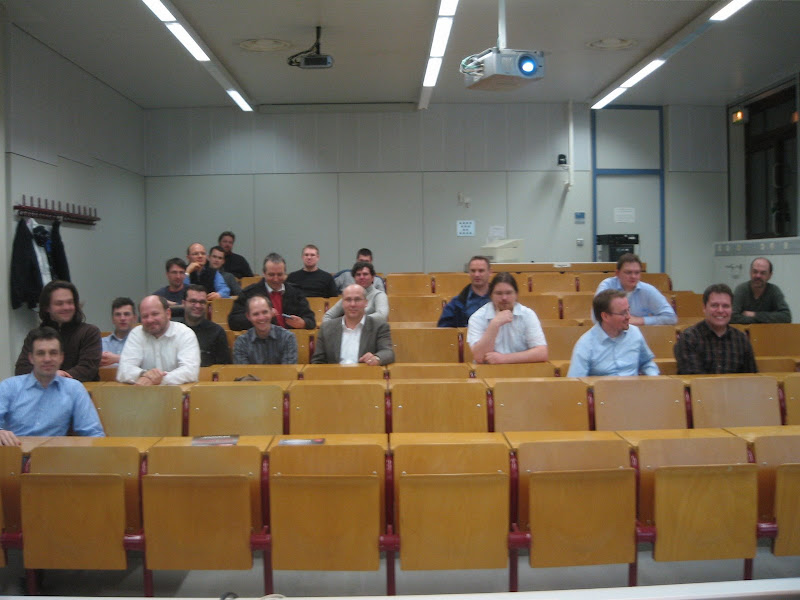 Part of the audience

Eckes took a picture of me ..

You will be able to download the slides from the Jug pages; or from here (PDF, 2 MB).

I ended up back home at 1am this morning ...

Reconfigure Oracle-XE to a different port for jdbc

I wanted to reconfigure my Oracle-XE instance to run the tnslsnr on port 1522 instead of 1521. So as first try I went in and just changed the listener.ora and tnsnames.ora files. But after those changes, the system did not give away a beep when I e.g. called lsnrctrl status.

The script asked some questions about ports (you can look them up in the copy in /tmp) and the db password etc. And then started the database with the new port.

Apple has introduced a new keyboard that has a cable and does not have the numeric keypad, making it much smaller than the already existing one with keypad. Actually as it does not need the battery casing, it is even smaller than the wireless one (see e.g. http://www.apple.com/keyboard/ ) and http://store.apple.com/de/product/MB869?mco=NDE4NDE5NQ for the new one in the German Apple store.

And you can immediately see that this is a real Apple product, as it is the same price as the one with keypad :-/

The RHQ / Jopr team has released a first public beta of the upcoming Jopr 2.2 and thus RHQ 1.2 release.

This first public beta consist of a big list of changes that you can see in the respective JIRAs:

As I have written earlier, there is a page available that shows an overview of the UI features - but of course it is better to try them yourself.

We have two jira systems as development effort is split between the foundation RHQ Project and the Jopr Project that is specific to JBoss technology management.

Or post a message in the Jopr user forum.

You can grab this public beta from the SourceForge download page.

Install documentation is available in the JBoss.org wiki.

Note, that there is no longer a separate agent download. The agent is delivered with the server package and you can install it as I have described here.

Are you in Karlsruhe and want to know about Jopr, RHQ and JBossON ?

As written previously, I will talk next wednesday, March 11th at the Karlsruhe Java User Group about Jopr, RHQ and JBoss ON. This will of course also include new Jopr 2.2 features.

My colleague Mazz has made a UI preview page of the upcoming Jopr 2.2 (and thus RHQ 1.2) release. You can view it at https://www.jboss.org/community/docs/DOC-13381 .

Of course you can always build Jopr 2.2 from svn and have a look at things yourself.

We have incorporated a lot of changes in the UI:

As Jopr 2.2 is not yet released, this is all still work in progress and subject to changes.

Please give us feedback - e.g. via Jira or mail to jopr-dev @ lists.jboss.org. Or meet us in #jopr at irc.freenode.net