WiPy on the home network

Recently there was a Kickstarter about "an Arduino that runs Python", the WiPy. This is a small IoT board with WiFi on it (which is not available on stock Arduinos) for an attractive price. And being able to use a high level language along with a lot of existing libraries makes it attractive too.

A few days ago I got the WiPys that I backed and the first obstacle to get the running was the power supply as they do not have a (micro) USB connector on board (and I also did not back the extension boards they offered).

Luckily I still had an old defunct USB hub from which I could solder out the connector and put it on a small PCB for this purpose (while doing that exercise I also found out that the 5V of the USB port are allowed to be 4.75-5.25V and on the end of a hub even being as low as 4.4V). 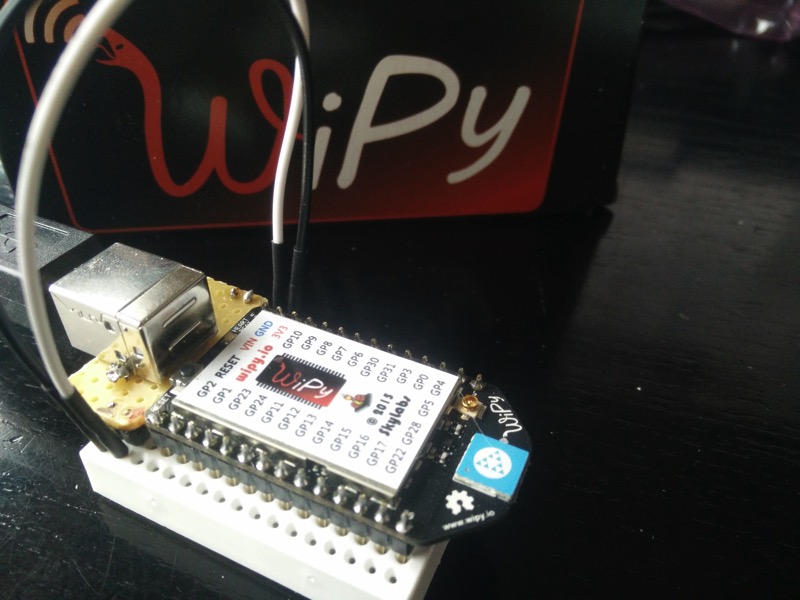 Now that the WiPy is on the breadboard, I set up my computer to scan for the WLAN of the WiPy and then telneted into the device. I poked around and tried to inspect the WLAN settings as described in the manual:

This immediately made the connection drop. It turned out I needed to first update the firmware to the latest version (v1.1 at time of the writing), which was painless (but a bit confusing, as they also supply a bootloader.bin, that is not needed).

After the firmware upgrade the above worked and I tried to change the device to talk to my home network. The caveat here is that at the moment you issue

to put the machine into station mode (default is being an access point), the connection drops. Some users have solved that by connecting via UART and serial line, but I did not really want to go that route.

Instead I edited boot.py on my local computer and then uploaded it via ftp into /flash. I found out, that if you don't terminate the ftp client and have a telnet connection open as well, I could easily (syntax) check the uploaded file by pressing Ctrl-D in the terminal:

The WiPy tells me that there is an error in my file, so I edit it locally and upload it again via the ftp connection. And only at the end when the WiPy is happy, I press the hard-reset button.

Now for reference my boot.by that worked for me:

Parts of that script were taken from the WiPy WLAN tutorial and this WiPy Forum post.
No comments:

In Stuttgart, there is now a Hackergarden Meetup group that tinkers with whatever the people showing up want to tinker with.

In the 1st edition I was doing some hacking on Arduino where two Arduinos were transmitting data over an encrypted radio via a RFM69 radio chip. This setup is described on the Codecentric blog.

Now in the 2nd edition we wanted to build on this and control a servo motor on one Arduino remote from the other one. This video shows the end result:

On the left you see a potentiometer, that is read out and the value is then shown on the Neopixel ring. The value is also transmitted via RFM69 chip to the other Arduino that has the receiver and which then drives the servo.

The setup on the server side looks like this: 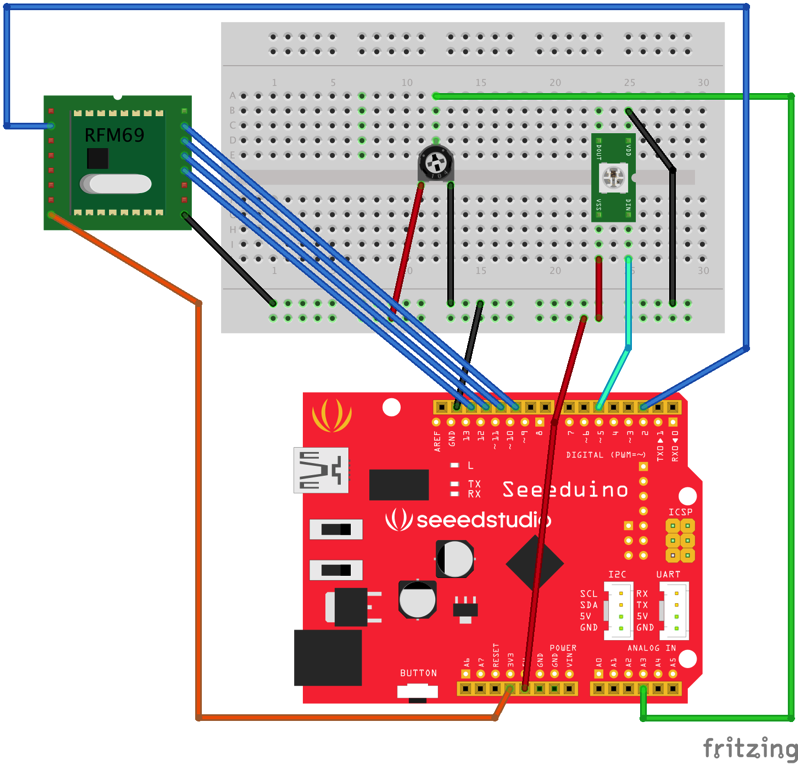 On the receiver side we used a "normal" setup like the one described on the before mentioned report. We had an issue for a while, as the servo was on a port that was also used by the RFM69 code, but once we fixed that, it worked.

The client side code is in my GitHub fork of the Hackergarden repository - I hope it will be merged soon :)