At the release meeting ... 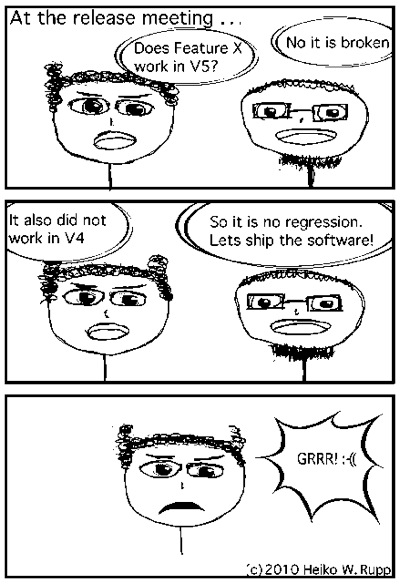 Putting text into a TextView on Android is easy - you just use TextView.setText(text) unlike other overloaded methods with the same name, you can not just use a String with Html formatting to format the passed text.

In order to do so, you either need to obtain the text from a resource file, use Html.fromHtml(String html) helper method or create a SpannableString that can then be passed to the method.

But while working on Zwitscher I saw that Html.fromHtml() is actually very expensive to use, as internally it is using the whole arsenal of XML parsing.

Plan B is using SpannableString...

Creating such a text is a bit complicated as you need to deal with individual Spans and so on, which I found inconvenient.

So I've introduced a SpannableBuilder helper class to make this process easier.

Usage is as follows:

Using this helper class does not trigger any XML parsing and is thus a lot faster than Html.fromHtml().

So far only methods that deal with TypeFaces are implemented, but extending the class for modifications of the background would be easy.

Using the camera (from your programs) on Android is easy ...

If you don't know it, it can be a PITA as I have e.g. described at the Android-Tech-Talk in Stuttgart.

For Zwitscher I was for quite some time trying to enable it to take pictures and upload them to pictures services like with other Twitter clients. So I started looking at the documentation and found a How To entry which basically points to the documentation for the Camera.  So I've been trying around with the preview stuff and was googling like crazy and so on, but this turned out to be too complicated for me to follow in the short term.

Yesterday I was reading about Intents in the Documentation and what Google Intents are available. This brought me to the idea of investigating if the camera could also be called that way.

So I've googled for "android camera app intent" and found this forum post which explains how to do it.

Basically start the camera via:

and then later when the picture has been taken fetch the picture in the onActivityResult() callback:

This takes a small picture suitable for e.g. Twitter.

So you see - if you know all this, it is fairly easy to start the camera, take a picture and then use it later. No dealing with PreviewHolder and all that stuff.

Suppose you want to test upgrading your software from version x to y. This often includes updates of database schemas, tables and content.

The obvious way to do this is

A better approach here is to

With PostgreSQL taking a backup would look like this:

and then the re-install:

It has been a while since the last tab sweep, so quite some material has accumulated:

First and notably: we now have contributor guidelines, which should make it easier for everyone to get contributions into RHQ.

Alexander Kiefer has finsihed his master thesis work on the Nagios Plugin and the dynamic types detection. The later work needs to picked up and worked on further. A big part of the resource type (and metric scheduling and .... code depends on the static nature of the metadata in the plugin descriptors. The code is currently in the nagios branch in git.

Anyway: congrats Alex and many thanks for your work and also thanks to your employer, AG der Dillinger Hütten,for sponsoring this work.

Steve Millidge contributed a large overhaul of the MySQL plugin to RHQ - thanks Steve!

The team is currently working on transitioning the UI to GWT for RHQ 4. To see what is going on, you can have a look at a short video overview or play with the first developer preview.

And then there was conference season for me and I gave talks at JUDCon Berlin and 1daytalk Munich:

Mazz has written an interesting article on how to do some RHQ agent profiling via Byteman. He also wrote about remotely installing agents on yet unmanaged machines.

Joseph Marques has written a short article on the new search functionality and a longer analysis on GWT compile performance - this is quite interesting and for sure also helpful for other projects that want to use GWT.

John Sanda has written a whole series of articles on usage of the RHQ cli:

Jay Shaughnessy has also written an article about the RHQ CLI. He is talking about using the provisioning feature from the CLI.

﻿Lukáš Krejčí has also written a series of articles:

As always, please give us (and / or the article writers feedback).