As I indicated in this post I have started running again some weeks ago. Now after around 7 weeks, I crossed the 100km barrier (so this makes 15km per week on average, in 2 sessions on average per week).

Lets see if I will stay motivated to do the next 100km also in 7 weeks or less.

One of my big motivational factors is clearly Trailrunner, a very cool desktop app for the Mac to file each run in a training diary and to graphically select routes and compute distances etc. It's really fun to select new routes to run.
Trailrunner is even able to create images from the route 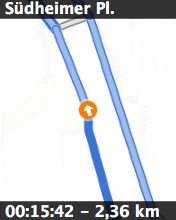 that can be uploaded to an iPod or a mobile phone as a miniature map to go (the image shows on top the name of the way-point and on bottom the expected target time (*) and the distance from the start). Also the map data (from various map sources can be shown on those micro maps)
*): One can set an expected speed for each route which is used to compute the expected time for each way-point; this helps to adjust the running speed while on the go.

It's no full blown GPS navigation (which seems to be supported with more sophisticated devices like the Garmin Forerunner), but is very helpful when running a new track for the first time.