Manual add instead of auto discovery

The Twitter feed is no longer autodiscovered, but you have to go to the platform and explicitly add it there. 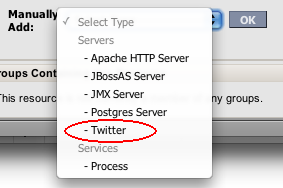 The reason behind it is that most users don't want to have a twitter feed discovered on each agent.

Support for other Twitter-like services

If you select the right template, this will automatically be filled in for you. 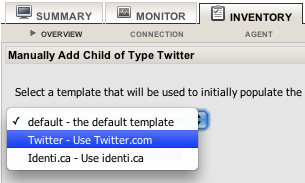 I've also updated the Alert sending in the HEIKO-EXP branch to be able to send to other networks than Twitter.
This means that in the system configuration, there is a new field for the base url of the services api. See above for possible values.

I've just seen that Twitter is offering a streaming api. This may be a nice addition to the plugin. Today every request to obtain values opens a new connection to Twitter. With the streaming api, this could probably go away.