I've been at JUDCon Berlin for the last two days and this has been a very good experience. The conference venue (Radialsystem V) was just perfect, my hotel was next door to the venue, and we had a lot of good presentations. 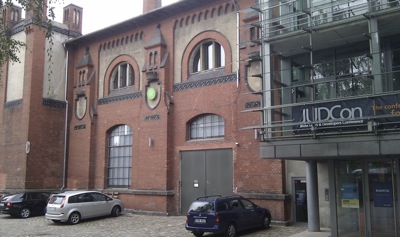 (Radialsystem V from outside)

Ok, this was a little sparse.

After last JUDCon in Boston was well received, the JBoss team decided to do another JUDCon outside of the US to meet more of the community. The choice was made to go to Berlin (probably because JBossWorld Berlin was huge too :-)

I've submitted a talk on plugin development for RHQ and the JBossAS admin-console, which was accepted, so I had the luck to go to JUDCon.

I arrived already on Wednesday evening, went to the hotel and later to a cocktail bar (Sanatorium 23) together with Tobias Hartwig, Mark Little, Bruno Georges, Marek Goldmann, Bela Ban and some others.

On Thursday JUDCon started with a "keynote" by Mark Little and then continued in two parallel tracks. I first went to the BlackTie talk by Tom Jenkinson - and after the talk it became apparent that the next presenter, Bill Burke, was not able to make it to the conference in time (he still was in Krakow at the JDD). So I took over and presented an overview over RHQ. The room was still full, nearly no one left even as Galder was advertising his Infinispan talk :-) As I did not prepare slides for the talk, I took the ones I used the week before at OneDayTalk (they are linked there). The biggest time of the talk I did a live demo of RHQ 3 including installing RHQ from scratch, taking my computer into inventory and showing the UI. As time was running out (45 mins aren't that much :-), I could not show provisioning. After the talk I got a lot of questions - directly at the end of the session and also throughout the day.

Next, there was lunch in the big room with a speech given by a representative from Ingres, the sponsor of JUDCon. After lunch, sessions continued and I attended the two talks by Jesper Pedersen (IronJacamar and Tattletale - the latter is definitively something I need to look into) and then one by Steve Ross-Talbot about Savara before I gave my talk about writing plugins for RHQ.

This talk went quite well until the point where I tried to load my generated plugin into the IDE and the IDE just hang. And then when trying to compile, mvn gave me an error about some git problem. This something I need to look into. Nevertheless, I guess my audience got the idea on what is needed to do.

After dinner, where an iPad was given away by Ingres (Red Hat employees were not eligible :-( ) Hackfest started with some lightning talks were Jesper was quickly presenting about JBoss AS 7 (now on GitHub). Hackfest went until 1am when were thrown out of the venue.

Friday started with another series of talks. targeted around jBPM and Rules and other relevant themes like Errai and CDi or performance. I sneaked in many talks for a bit.

JUDCon has finished at 5:30pm with most of the participants staying 'til then end. I went to the airport and back to Stuttgart.

JUDCon was a great experience with lots of good talks and conversations. Participants were happy to get information from the source, from the people who know the stuff best as they have written it in the first place.

And for me it was a great pleasure too to meet my colleagues, who I normally only read in emails, blog posts or on Irc.

Slides to all talks are supposed to show up on the JUDCon page very soon. 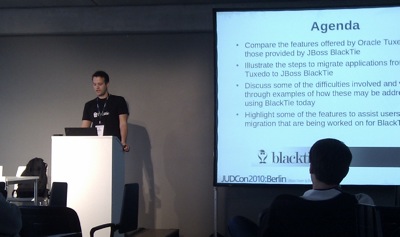 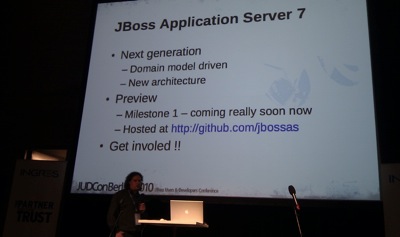 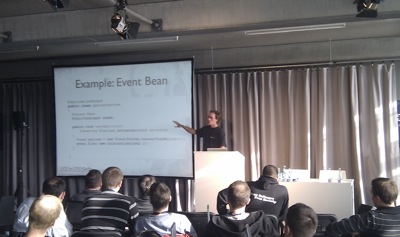 Good talk on a great conference Heiko! Lets see if we can find time to have a glance at our monitoring solution later this year!